Here is where you will find Olivers' Latest Adventures featured on this site and social media.

Traveling With A Puppy

Did you ever wonder what it would be like to go on road trips with a puppy? Check out these posts featuring everything you need to know about having a fantastic trip with your favorite four-legged family member!
Click Here

Perhaps the sweetest little critter we’ve ever welcomed into our family.  Oliver the Cavalier King Charles Spaniel is a special and super unique pup.  On This page I share everything Oliver!

Below are a few of my favorite photos featured on this site.  You will find these images in blog posts that highlight our adventures.

Over the past season, a lot has changed in my home and garden.  Our sweet Aussie passed away and we welcomed a new pup into our lives.  In this post, I’d like to introduce you to our Cavalier King Charles Spaniel as we start a new adventure featuring Oliver and Friends. 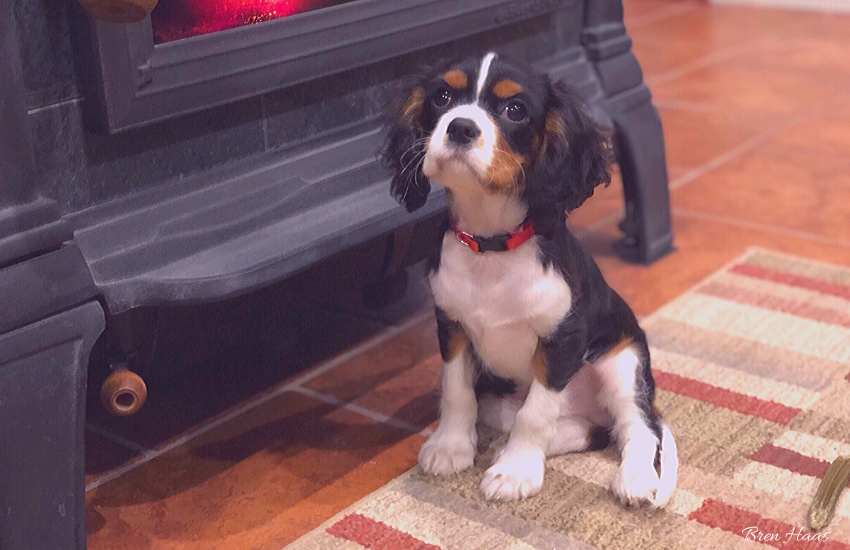 Oliver arrived at our house on December 3, 2018. He quickly became friends with our other fur babies. Oliver was only 6 pounds when we brought him home. Kenny Kitty suddenly looked HUGE compared to this new puppy.  Jack the indoor cat was very standoffish but curious at the same time.  The new puppy napped almost half of the day and slept through the night in his kennel. The Cavalier King Charles Spaniel didn’t arrive in America until 1952.  The breed has become increasingly popular but it wasn’t until 1996 that this breed achieved full recognition by the AKC as the 140th AKC breed. How could you not love that little puppy?!

Why a Cavalier King Charles Spaniel 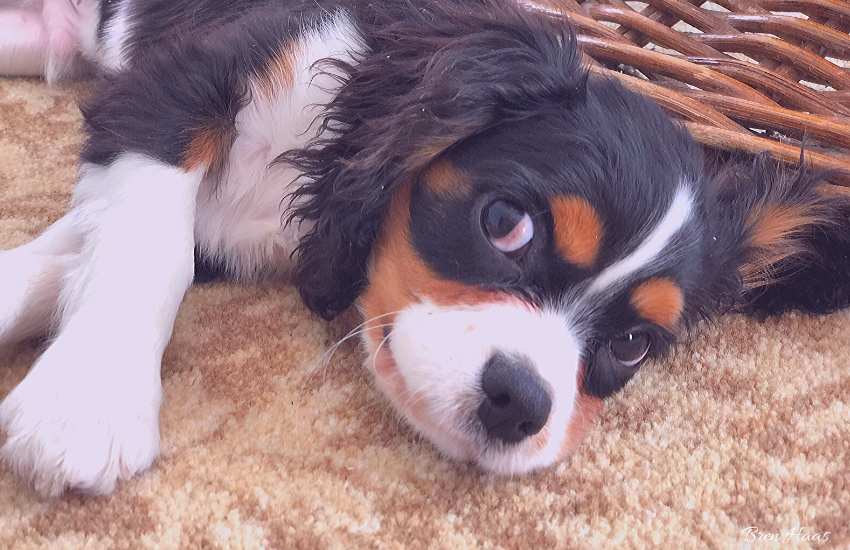 I had been following the Cavalier Groups on Facebook for the past year when Olivia started showing signs of age at 15 years old. My dear friend Starr travels the United States with her 4-year-old Cavalier and I fell in love with her post on social media featuring George Micheals ( Starrs Cavalier King Charles Spaniel).

After following a few groups online featuring information about the breed I totally fell in love and knew this was the dog I would want to own after losing my sweet Aussie Olivia to age. 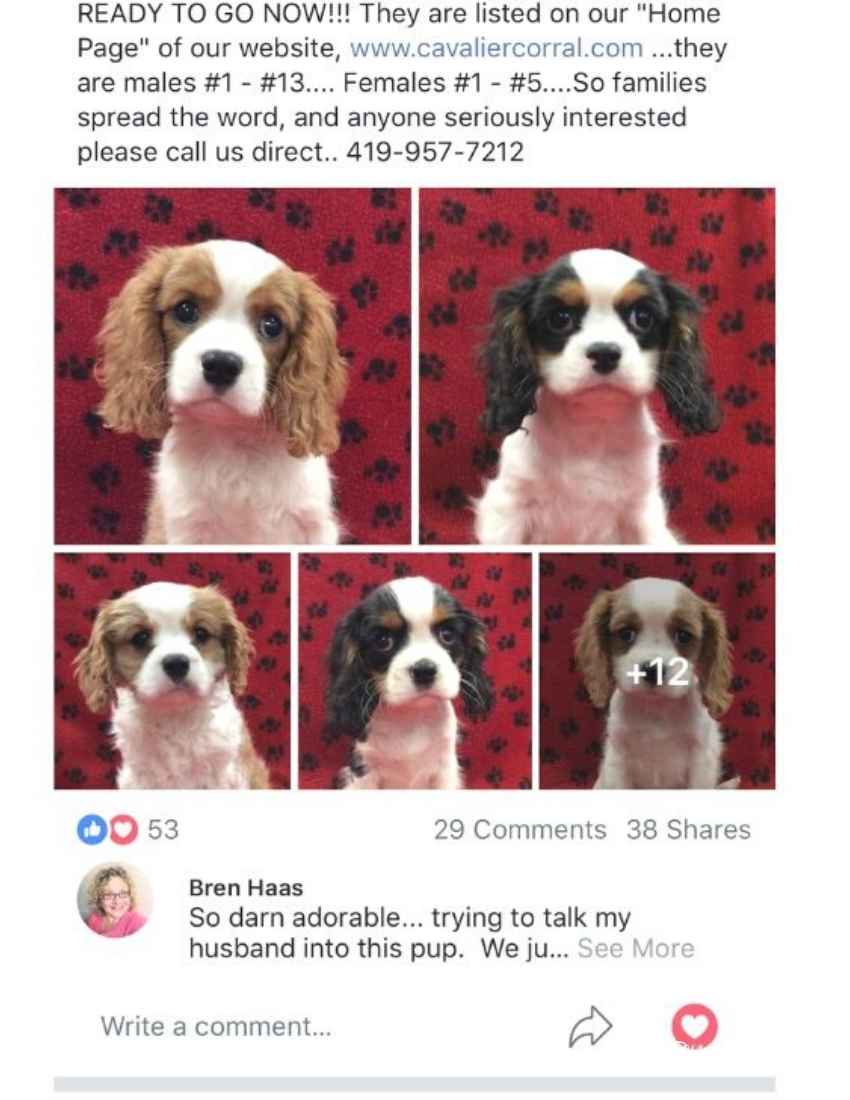 The Cavalier King Charles Spaniel averages about 16- 20 pounds as an adult.  In the photo below Oliver was such a good boy holding still on Dads scale in the big barn at almost 8 months old.  The size of this sweet little breed is one of the main reasons we picked this puppy.

By 7 months old Oliver weighs 15 1/2 pounds according to Dad’s scale in the big barn!

When my family visited the local breeder back in December 2018 I actually had my heart set on chestnut and white female.  There were a few available that fit my likings but little Oliver stole our hearts. The Cavalier comes in 4 different colors.

I highly recommend Cavalier Corral which is located in Northwest Ohio.  The owners and breeders live on location offering boarding and grooming as well as training.  You can find them on Facebook under “Cavalier Corral” or check out their website at www.cavaliercorral.com.   Be sure to tell Lee or Cynthia Vogelsong (breeders/trainers) that Oliver sent you over for a visit.

The toy spaniels were a part of European court life as early as the fifteenth century, sometimes referred to as ‘comforter spaniels’ as they snuggled on their owner’s laps. Artest such as Van Dyck, Titan, Stubbs, and Landseer brought them to life in paintings.  The bred is no doubt a perfect addition to any family being the before companion dog.

Of course, being a cat lady I was a little concerned with how the felines we share our home and garden with would take to a new puppy.  Oliver quickly became a part of the family and with the first encounter of the indoor and outdoor cats, it was obvious he was perfect!

Kenny Kitty stays close by when Oliver is in the house. In the photo below Kenny is watching the puppy nap – not sure about this new friend. It took a few days before he finally sat next to the puppy. It was almost like he was exploring trying to figure out the puppy’s boundaries.  Within a few days, they were sitting next to each other and sharing toys.  Our previous Dog loved cats but not like this breed.

Today they are the best of friends… They do almost everything together.  Kenny Kitty isn’t allowed outside so Oliver shares his adventures with Kenny when he joins him in the mudroom to play!

Oliver quickly picked up on how the older cats in the garden behave.  At 8 months old he would still run circles around them as if he were showing off or inviting them to come to play.  Oliver quickly learned to give Boo Kitty ( who has been on our property since 2006) his space and respect.  Boo Kitty will hiss at Oliver as a reminder – but he does that to all the other cats he shares the garden with.

Calico Betty and Olivia were the best of friends having grown up together.  It brings tears to my eyes to see how she has taken to this puppy.  Betty plays with the calico unlike any senior kitty would be expected.  I catch her coming up to him and nudging him to play, which Oliver loves to do!

Besides Kenny Kitty.. Oliver’s favorite toy to grab from the toy box is his Lamb Chop Doll.   I want to note we’ve had to throw a few toys away but this little Lamb Chop is one of his favorite.  It is important to watch for tears in the toy-making sure the pup isn’t eating the stuffing.  I like this toy because it has a squeaker in the middle that we make a game out of playing.  Oliver also loves fetching the doll if you throw it!  I have found the Lamb Chop doll at Kroger, Walmart, Menards and of course my favorite Amazon. 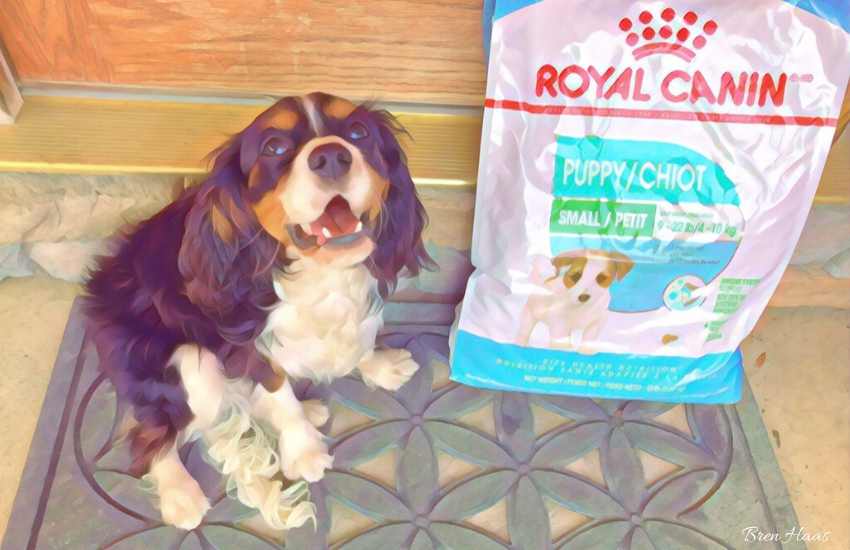 Our Oliver is spoiled… he has had the same food the breeder recommended to us all his life.  I am spoiled because I can order it on Amazon Prime and Royal Canin is delivered to my door within a day!   I love how he looks and his behavior is so healthy which I really believe is because of the food we feed him.

You’ll see Oliver in my videos .... he is always with me and stealing the show! His first spring with us was super fun because everything was a new adventure for us all. It has been fun watching him make friends with the outdoor kitties.  Everyone is used to him now… even Boo Kitty!

The Latest Oliver Video
It is so much fun sharing all the fun tricks Oliver is learning.  I’ve put together this playlist so you can follow our adventures.

If you are on YouTube be sure to show your support and subscribe to Bren Haas Channel.

Follow Oliver’s adventures on my website.  Oliver is a huge part of our family and so he is featured in many of my videos (except in the kitchen – where he isn’t allowed!)

Fun Facts About The Guinea Fowl 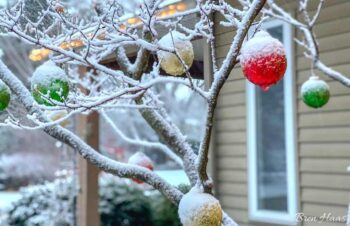 First Snow of the Year Video and Image Feature

In this post, I wanted to share the first snow of the year – 2020.  Check out the video from Oliver and my walk just 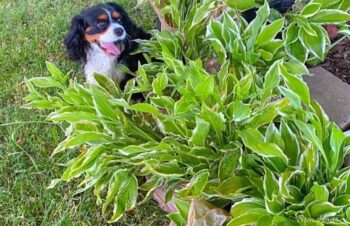 Dividing and Moving Hostas in The Summer Home Garden

In this post, I am sharing how I have successfully dig and move perennial hostas in my home garden.  You will find images, videos, and 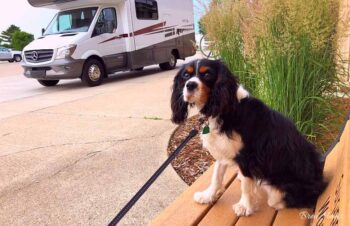 In this post, I share a video, photos, and links to sights to see.  This is from our Winnebago Roadtrip out to Forest City Iowa. 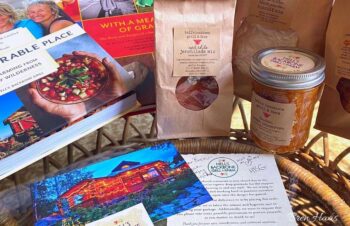 In this post, I share a very special unboxing video featuring gifts from Hell’s Backbone Grill and Farm. Check out the video and product recommendations 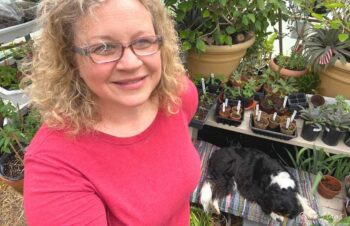 In this post I share my weekly video blog featuring what is growing on in the greenhouse dome.  You will see tips on new tomato

I’d love to hear from you… are you a fur baby owner?  Share your story with us so we can connect.  Be sure to comment on this post or reach out on my contact page featured on this site. If you have any questions about this bred or owning fur babies please message me or connect on the social media links provided on this page. Happy Adventures,